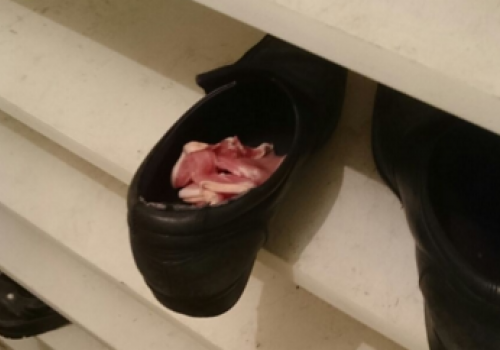 Two men, described as wearing dark coloured uniforms, allegedly entered the Al Rahman Mosque and Community Centre in Crowndale Road on Sunday night and began placing pieces of pork – which is considered “haram” or forbidden in the Islamic faith – inside shoes left on a rack near the entrance.
When confronted, the two men, who were both described as white, with short hair and beards, threw pieces of meat towards worshippers.
Helal Ahmed, who was praying at the mosque when the attack took place at around 7:30pm, told the New Journal: “Two people came inside, both were acting strange. I saw one person was filming, but I didn’t see what they were doing at this point.
“What they were wearing looked like police [uniforms], I thought they were police at first. They had black trousers and black jackets, like the heavy coats that police wear in winter.
“When he saw me he threw a piece of pork meat, but luckily it dropped one-and-a-half feet [in front of me].”
The men fled the scene without saying a word, Mr Ahmed said, adding: “They opened the door and went. I switched on all the lights to see what happened. I looked at my shoe and they put some pieces of pork meat in another brother’s shoe. But he left it, I gave him a spare sandal. He can’t use that shoe, it’s not halal.”
Describing his reaction to the attack, which another member of the mosque described as a “disgusting and heinous attack on a peaceful place”, Mr Ahmed said: “I couldn’t accept it. My throat is dry. I can’t even explain it. It’s kind of senseless.”
He added: “It’s unbelievable. I’ve been going to the mosque for about eight years and it’s the first time this happened in this mosque.”
Mr Ahmed said the police, who arrived shortly after being called, had been “unbelievably helpful”. He said: “They cleaned up, took the pieces of meat. They spent all night here and even in the morning at 6 o clock they were still on guard.”
Scotland Yard said two men were later arrested near the scene on suspicion of inciting racial hatred.
A Met spokesman said: “Local officers remain in the area carrying out reassurance patrols.”