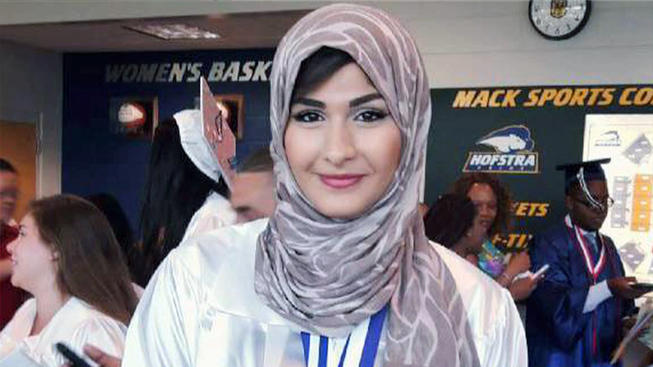 A New York teenager who went missing after she said she was harassed on a train last week has been found.
Yasmin Seweid, 18, was found in the early hours of Saturday morning, officials from the Nassau County Police Department’s Missing Persons Squad said. The teen was seen being taken from her Long Island home on a stretcher Saturday afternoon.
The Nassau County Police Department put out an alert on Friday saying Seweid had been missing since Wednesday.
Last Thursday, Seweid spoke out after she said she was harassed and intimidated by three men who tried to rip her hijab – a religious head scarf – off.
Police said they were searching for those men, who allegedly targeted Seweid on the 23rd Street subway station serving the 6 line at about 10 p.m. on Dec. 1.
Seweid posted on Facebook saying the men called her a terrorist, grabbed her bag and broke the strap of it and told her to “take that rag off your head”. She said Trump’s name was repeated during the alleged attack.
She called the incident “traumatizing” and spoke with multiple news organizations about it.