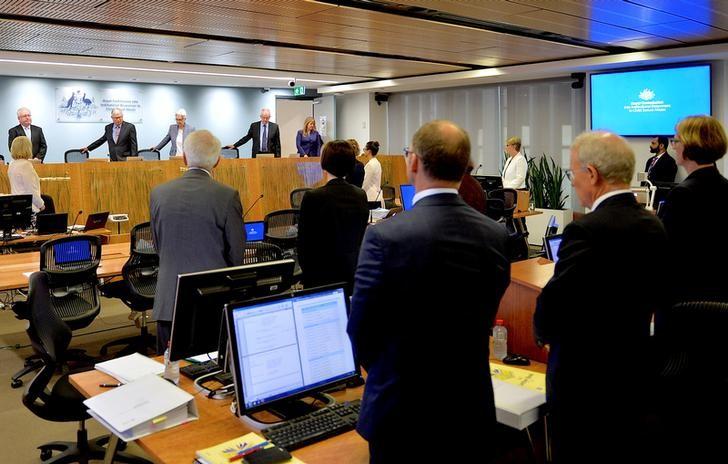 Seven percent of Catholic priests working in Australia between 1950 and 2010 were accused of child sex crimes but few were pursued, Church data showed on Monday, as hearings began over allegations dating back decades.
Last year, Australia’s most senior Catholic, Cardinal George Pell, said the Church had made “enormous mistakes” and “catastrophic” choices by refusing to believe abused children, shuffling abusive priests from parish to parish and over-relying on counseling of priests to solve the problem.
Monday’s data, seen as the most substantial to detail the extent of child sex abuse in the Church, were compiled with the Catholic hierarchy’s cooperation by the Royal Commission into Institutional Responses to Child Sexual Abuse.
Francis Sullivan, chief executive of the Church’s Truth, Justice and Healing Council, said 1,265 Catholic priests and religious brothers and nuns had been accused between 1950 and 2010.
“These numbers are shocking. They are tragic and they are indefensible,” Sullivan told the commission in Sydney. “As Catholics, we hang our heads in shame.”
Sullivan held back tears as he described the “massive failure on the part of the Catholic Church in Australia to protect children from abusers”.
Commission research showed 4,444 people had made allegations of abuse to 93 Catholic authorities between 1980 and 2015.
The worst-offending institutions were the orders of brothers who often run schools and homes for the most vulnerable children, with girl victims aged 10.5 on average, while boys were 11.6 years old, the commission’s research showed.
The church surveyed 10 religious institutions and 75 church authorities to uncover the abuse data on priests, non-ordained brothers and sisters, and other church personnel employed between 1950 and 2009.
Prosecutions have been launched in 27 of the 309 abuse cases the commission has referred to Australian police, with 75 more being investigated, it says.
The hearing is due to run for three weeks.
Archbishop of Sydney Anthony Fisher said in a statement issued through the Vatican that he “personally felt shaken and humiliated” by the findings.
“The coming weeks will be traumatic for everyone involved, especially the survivors,” he said.
“Confronting as it will be, I remain determined to do all we can to assist those who have been harmed by the Church and to work towards a culture of greater transparency, accountability and safety for all children,” Fisher said.
Two members of the Pontifical Commission for the Protection of Minors set up by Pope Francis were invited to give evidence via video link but instead opted to provide written evidence on the group’s work, the commission was told.
Sexual abuse of minors in the Catholic Church broke into the open in 2002, when it was discovered that U.S. bishops in the Boston area had moved abusers from parish to parish instead of defrocking them.
Similar scandals have since been discovered around the world and tens of millions of dollars have been paid in compensation.
Source: http://www.reuters.com/article/australia-abuse-idUSKBN15L1JV