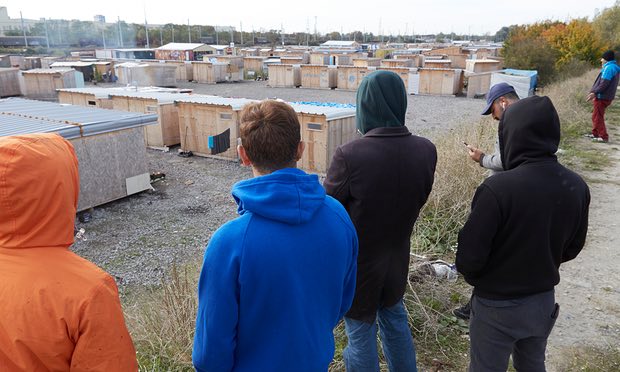 Children and women are being raped by traffickers inside a refugee camp in northern France, according to detailed testimony gathered ahead of fresh legal action against the UK government’s approach to the welfare of unaccompanied minors.
Corroborating accounts from volunteers, medics, refugees and other officials reveal that sexual abuse is common within the large camp at Dunkirk and that children and women are forced to have sex by traffickers in return for blankets or food or the offer of passage to the UK.
Legal proceedings will be issued by London-based Bindmans against the Home Office, which is accused of acting unfairly and irrationally by electing to settle only minors from the vast Calais camp that closed last October, ignoring the child refugees gathered in Dunkirk, 40 miles away along the coast.
The legal action, brought on behalf of the Dunkirk Legal Support Team and funded by a crowd justice scheme, says the Home Office’s approach was arbitrary and mean-spirited. On Wednesday the government’s approach to child refugees provoked widespread indignation when the home secretary, Amber Rudd, announced the decision to end the “Dubs scheme”, having allowed just 350 children to enter the UK, 10% of the number most MPs and aid organisations had been led to believe could enter.
On Friday the archbishop of Canterbury said the government’s decision meant that child refugees would be at risk of being trafficked and even killed. Justin Welby’s warnings of what could happen if child refugees were denied the opportunity of safe passage are graphically articulated in the testimonies gathered over several months by the Observer.
Accounts from those at the camp, which currently holds up to 2,000 refugees, of whom an estimated 100 are unaccompanied minors, portray a squalid site with inadequate security and atrocious living conditions. The Dunkirk Legal Support Team says the failure of the authorities to guard the site has allowed the smugglers to take control.
One volunteer coordinator, who started working at the camp last year, said: “Sexual assault, violence and rape are all far too common. Minors are assaulted and women are raped and forced to pay for smuggling with their bodies.” Testifying on condition of anonymity, she added: “Although the showers are meant to be locked at night, particularly dangerous individuals in the camp have keys and are able to take the women to the showers in the night to force themselves on them. This has happened to women I know very well.”
She said that one of the most in-demand products distributed to women in Camp de la Linière – the Dunkirk Camp – are adult nappies. “Women are too scared to go to the toilets in the night. None of the locks in the women’s toilets in the camp work,” she said.
The volunteer also recounted several incidents where minors had been attacked: “A 12-year-old girl was groomed in the camp by a man well over twice her age. When she no longer wanted to speak with him because his behaviour towards her had become so obscene, he threatened her. A 13-year-old boy ended up returning to his home country having been raped in the camp.”
Another statement provided by an ex-NGO worker, who spent three and a half years volunteering at Dunkirk, said men targeted women and children because they were so vulnerable. “You see women in a male environment with men that are disconnected from reality, so there are serious incidents such as rape. Women, children, young teens, male and female.” The worker referred to the children as being like “little steaks” because they were considered so appetitising and vulnerable to traffickers, of whom dozens are resident on site. One woman travelling by herself said that unaccompanied individuals were viewed as prey: “All men see that I’m alone, and it’s the same for the children. Men see me and they want to rape me.”
The witness statement from another volunteer, who could speak Arabic, describes how a 14-year-old from Morocco appeared to have been raped and could not sit down and kept repeating that he felt so “ashamed”.
Their account stated: “He didn’t want anything, he was only crying and asking for his mum. He had been badly beaten.”
The worker also described how a young child had been sexually assaulted on site, leaving her mother so shocked she had been rendered mute. “We have also seen in the past a woman holding a seven or eight-year-old girl by her arm next to GSF [the charity Gynaecology sans Frontières has a unit on site] and apparently this child had been raped just before, and the woman was afraid to report it to police. She was there, standing silent refusing to report it.”
Source: https://www.theguardian.com/world/2017/feb/12/dunkirk-child-refugees-ris…