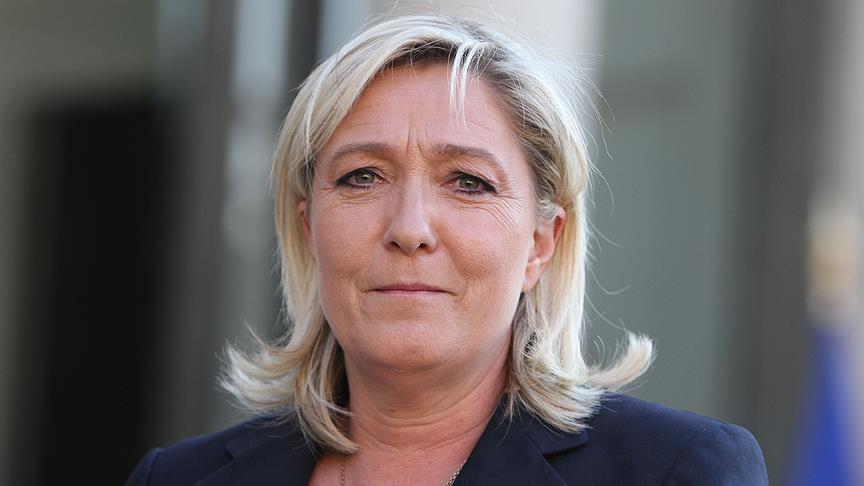 A French journalist and his cameraman were attacked by security guards after trying to ask far-right candidate Marine le Pen a question over allegations her security guard was paid as a parliamentary aid.
Political reporter Paul Larrouturou, who works for the popular news TV show Quotidien, was violently forced out of a Paris exhibition hall by security guards, during a visit by Front National presidential candidate Ms Le Pen in front of a crowd of reporters.
After politely asking the party leader whether her bodyguard really was her parliamentary assistant, two security agents grabbed the journalist and dragged him to the door.
He can be heard asking the pair to “let him go”.
“You can’t prevent me from asking a question to Marine Le Pen,” he said.
The security agents pushed him out and closed the door behind him.
In a video of the scene filmed by the journalist’s cameraman, one of the security agents is heard saying: “Alright? He assaulted police officers”.
Mr Larrouturou walks back into the conference centre and shows the security agent his press badge, before repeating: “I am accredited – you cannot prevent me from asking a question to Ms Le Pen. So you are going to let me go and immediately say you are sorry for the violence.”
But the agents repeat the claim that he “assaulted a police officer” and push him out of the door again.
“Do you know anything about the liberty of the press?,” Mr Larrouturou is heard asking, as one of the agents realised the cameraman was filming.
“Who do you think you are? I’m going to take your camera – you fool,” he said, hitting the front of the camera.
A woman comes out of the conference centre to try and calm down the security agents and bring them back in, when the cameraman is heard calling them “son of a coward”.
The security staff are shown coming back out of the hall and pushing the man with the camera, who stumbles back while the other security guard hits him again in front of a small crowd of reporters and broadcasters.
As the journalist begs them to “stop”, one of the security agents tells the pair with a threatening finger : “You are not coming in and you are not either”.
The Quotidien journalist continues to call on them to stop when one of the agents looks at him and says “let’s go and speak like men” before walking back into the exhibition hall.
The Front National (FN) told French media they had nothing to do with the incident, which they claimed did not involve their staff.
The organisers of the event at the Palais des Congres in Paris said the men in the video were part of their staff.
They argued a crowd movement around Ms Le Pen had become “dangerous in terms of security”.
“There was a crowd movement, he pushed and we asked him to leave. There was a risk,” a spokesman for the organisers of the event told Pure Medias.
French newspaper Le Parisien said it was well-known the FN consistently refuse press accreditation to journalists from the Quotidien show. Its main presenter, Yann Barthes, is reported to have been banned from a FN convention in Lyon this weekend.
Source: http://www.independent.co.uk/news/world/europe/marine-le-pen-journalist-…