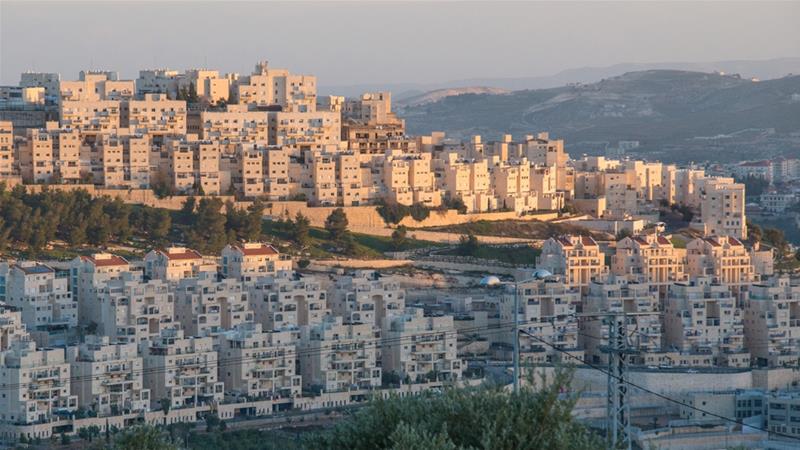 Palestinian politicians and human rights groups are warning that a new law passed by the Israeli parliament violates international laws and is a step towards Israel annexing the occupied West Bank.
The so-called Regulation Law, passed on Monday night, allows for the retroactive legalisation of about 4,000 homes built by Jewish settlers on privately owned Palestinian land.
“The law sets a new legal framework that implements the Israeli political interest and puts it above international humanitarian law,” Suhad Bishara, a lawyer at the Adalah legal centre for Arab minority rights in Israel, told Al Jazeera.
The law violates both the right to property and the right to dignity, Bishara said.
“The most obvious case here is that it violates property rights, because it basically confiscates private property for the sake of the illegal settlers,” she said. “But we cannot avoid the aspect of dignity here, and humiliation, and no value at all for the rights of the Palestinian owners of the land.”
Before the bill was passed, Israel’s attorney general said that it was unconstitutional and that he would not be able to defend it. Along with other rights groups, Adalah is set to file a petition against the law to Israel’s Supreme Court later this week, as well as asking for a temporary order not to implement the law until Israel’s highest court gives a final decision.
According to the Israeli rights group Peace Now, the law will allow for the expropriation of land in more than 50 settlements and outposts. There are 16 cases where demolition orders have already been issued by Israeli authorities, including land in the settlements of Ofra, Eli and Beit El, among others. As a result of the new law, the settlers in these illegal outposts would be allowed to remain in their homes.
Palestinian lawmakers in the Knesset denounced the law, calling it a direct challenge to the international community in the wake of December’s United Nations Security Council resolution that called for an end to settlement building.
“From the political point of view and from the legal point of view, this law should not have been legislated. This is a law that is meant to implement the creeping annexation of Palestinian occupied lands to Israel,” Aida Touma-Suleiman, an MK with the Arab Joint List, told Al Jazeera.
“This is a law that is challenging the international community. It’s arrogant behaviour by this government, who are not willing to pay attention to what the international community is [saying]. It is about time to hold them responsible for the decisions and laws they are legislating.”
Gilad Grossman, a spokesperson for the Israeli human rights NGO Yesh Din, said that the law has stripped Palestinian landowners of any chance to reclaim their land.
“What it means is that Palestinian landowners can’t get their land back, whether they want to or not,” he said.
As a result of the new law, Palestinian landowners only have the option of financial compensation, Grossman added – “to go through the system of the people who stole your land and to ask for them to give you some money, as much as they decide to give you, on the conditions they decide with the proof they demand”.
The ownership of the land itself will remain in the hands of the Palestinian landowners, although they will not be able to access or use it.
“It’s a very cynical law,” Grossman noted. “It basically means that they own the land and can get it back in the future, if there will be some kind of political agreement and decision regarding the West Bank. It was stolen and now it’s being leased against their will basically, and there’s nothing they can do about it.”
On Tuesday morning, Israel’s high court ruled that 17 buildings in the illegal outpost of Tapuach Maarav would have to be demolished by 2018. It is not clear how the new law will affect that ruling.
Source: http://www.aljazeera.com/indepth/features/2017/02/israeli-settlement-law…