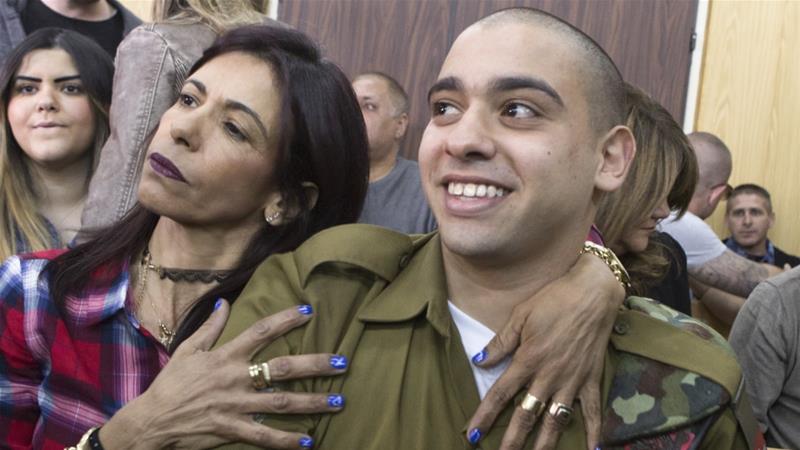 An Israeli soldier who shot and killed a wounded Palestinian, who was incapacitated having already been shot, has been sentenced to 18 months in prison for manslaughter.
Judge Maya Heller of the military court in Tel Aviv delivered the sentencing on Tuesday in a case that has stoked passions, debate and protest.
Analysts had expected Elor Azaria, who was convicted of manslaughter one month earlier, to be jailed for fewer than the maximum sentence of 20 years for killing Abed al-Fattah al-Sharif.
“This was at the lower end of what the prosecution had asked for when they requested that Azaria would serve between three and five years,” said Al Jazeera’s Bernard Smith, reporting from Tel Aviv.
In her statement, Heller claimed that there were mitigating factors to the killing, which she said took place in “hostile territory”.
While she said that Azaria’s family “suffered” as a result of the trial, she noted that Azaria has not expressed remorse.
The March 24 shooting, in the occupied West Bank city of Hebron, was filmed by activists from the Israeli B’Tselem human rights group.
That video shows Sharif, 21, lying on the ground, shot along with another Palestinian.
Azaria, a 20-year-old combat medic, then delivers the fatal blow, shooting him again in the head without any provocation.
Issa Amro, director of the Hebron-based Youth Against Settlements activist group, told Al Jazeera that a sentence of 18 months in jail “is not proportionate with what [Azaria] did”.
“We are talking about a war criminal, according to international law,” he said, adding that it was likely Azaria would receive a pardon from the government.
“I believe Azaria was following orders to execute Palestinians, and leave them bleeding until they pass away,” he said. “This is what [Israeli soldiers] did in many cases in Hebron, in Jerusalem, in Ramallah. Israeli soldiers are not held to account. I’ve just seen soldiers celebrating Azaria getting 18 months.”
The case raised questions about how Israeli soldiers deal with perceived threats by Palestinians.
Shortly after the shooting, the Palestinian leadership demanded the United Nations investigate what rights groups have called Israel’s “extrajudicial killings”.
Sharif’s father, Yusri, has previously said Azaria deserves a life sentence.
According to a survey in August by the Israel Democracy Institute, 65 percent of the Jewish public supported Azaria and his claim of self-defence.
Prime Minister Benjamin Netanyahu and other prominent Israeli politicians had thrown their weight behind Azaria, calling for the soldier to be pardoned.
Source: http://www.aljazeera.com/news/2017/02/elor-azaria-18-months-palestinian-…