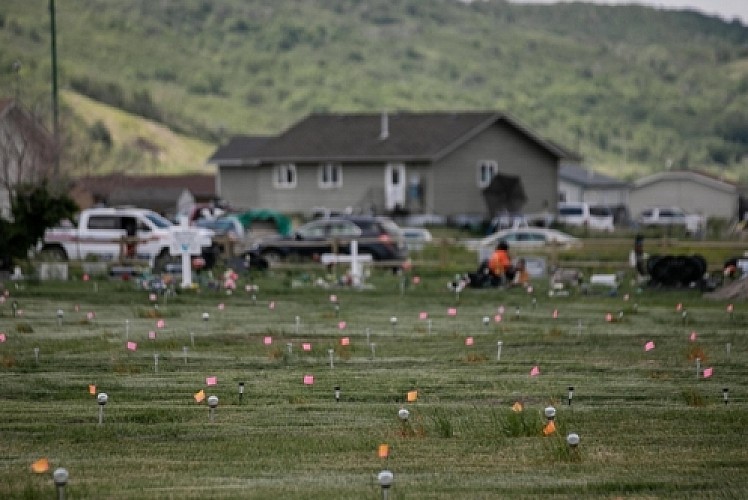 A indigenous nation has called on the Canadian government to release residential school attendance records to help identify unmarked graves.

In May, the Tk’emlúps te Secwépemc First Nation announced the initial discovery of 215 unmarked graves near the Kamloops Indian Residential School.

Presenting the full report on Thursday, the nation said they expect more graves to be found as the search continues.

An early discovery of children’s bones helped guide the search.

The initial findings from the Tk’emlúps this spring triggered a national reckoning over Canada’s legacy of residential schools. In the months that followed, the tally of these unmarked graves across the country has increased to more than 1,100.

These government-funded boarding schools were part of a policy to attempt to assimilate indigenous children and destroy indigenous cultures and languages.

Kamloops Residential School in British Columbia was the largest in the country. Opened under a Roman Catholic administration in 1890, the school had as many as 500 students until its closure in 1978.

“There are very likely to be a number of human burials in the area,” said ground-penetrating radar specialist Sarah Beaulieu, who presented the findings. “This investigation has barely scratched the surface.”

The initial area of interest was was chosen after Tk’emlúps elders recalled children, some as young as six, being asked to dig holes there, Ms Beaulieu said.

Tk’emlúps te Secwépem Chief Rosanne Casimir appealed to both the federal government and the Catholic Church to release attendance records from the school to help identify the remains.

She said providing the records would be a “first step” in assisting the investigation.

“We are not here for retaliation, we’re here for truth-telling,” she said.

Estimates by indigenous leaders suggest over 6,000 children died at residential schools from causes like disease, accident or suicide.

The record-keeping at residential schools when children died was often poor – the child’s name, gender or cause of death were not always recorded. The common practice was not to send the bodies back home.

Many children were buried in neglected graves.

To this day there is no complete picture of the number of children who died in residential schools, the circumstances of their deaths, or where they are buried.