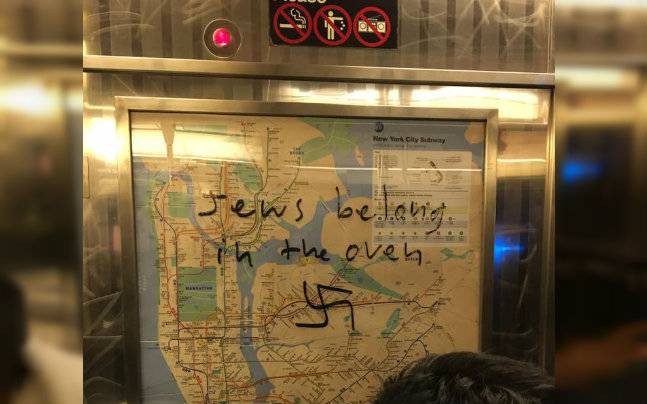 Anti-Semitic incident joins chorus of recent, high-profile occurrences all throughout the United States in which Jews and their property have been attacked by assailants; FBI: Anti-Semitic crimes are the most common hate crimes based on religion in the United States and racist violence against Jews is on the rise.
Several high-profile anti-Semitic incidents in the United States have been reported in the last few days, including the latest incident in which swastikas and racist graffiti saying, “Jews belong in the oven,” were scribbled on a Manhattan subway.
According to Gregory Locke, a resident of New York City, “The train was quiet and everyone looked at each other uneasily about what to do. One of the passengers stood up and said, ‘Rubbing alcohol. Let’s get rid of this shit.’ He found some tissues and we got to work.
“I’ve never seen so many people put their hands in their pockets and bags at the same time looking for tissues and hand sanitizer. Within two minutes, all the Nazi symbols were gone.”
Locke posted the experience to his Facebook page, which was shared 100,000 times within hours. One passenger said, “I guess this is Donald Trump’s America,” to which Locke responded, “No, sir. Not tonight and not ever. Not as long as stubborn New Yorkers have anything to say about it.”
Meanwhile, in Chicago, the downtown Loop Synagogue was vandalized by an unknown assailant who smashed windows and placed Nazi stickers on the front door.
The vandalism is being investigated by local authorities who are terming it a hate crime.
Loop Synagogue President Lee Zoldan said, “I was stunned. I was not prepared for any of this. We have a lot of contingency plans for what happens religiously, or what happens financially, but not for this.
“We serve all the Jews in the Loop, which is a lot of Jews. We intend to continue to be here and continue serving our community. “It’s not going to take us down. We’re going to remain strong.”
The Archbishop of Chicago, Bishop Blase J. Cupich, said, “We stand with our Jewish brothers and sisters as they worship at Chicago Loop Synagogue this Sabbath. Hate will not prevail.”
A report by the Washington Post noted that according to the FBI, anti-Semitic crimes are the most common hate crimes based on religion in the United States, and racist violence against Jews is on the rise.
In New York City, a Jewish woman was physically and verbally assaulted by a man who called her a “dirty Jew” and shoved her. The NYPD Hate Crime Task Force is investigating the incident and the suspect is still at large.
In addition to these latest incidents, there have also been a series of widespread bomb threats called into Jewish centers throughout the US.
Source: http://www.ynetnews.com/articles/0,7340,L-4917913,00.html