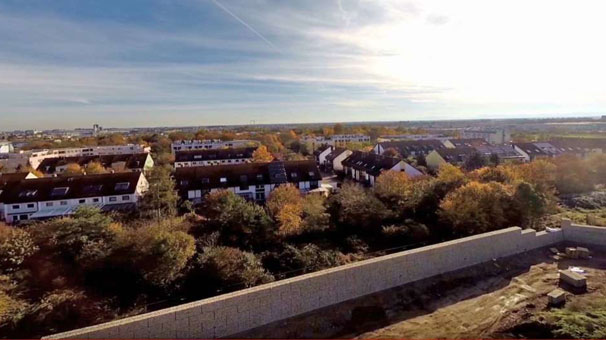 A suburban town in Germany is building a 13ft-high stone wall to separate residents from refugees living at a nearby migrant accomodation facility.
Officials from Neuperlach Sud, outside Munich, said the prospect of a wall was raised after locals complained about 160 unaccompanied young refugees moving into the area.
The residents argued the values of their houses would decrease due to the proximity of the refugee centre and the noise issuing from it.
The nearest houses to the shelter are located 25 meters away and are separated by a road.
When finished, the barrier will stand taller than the Berlin Wall. A judge in Munich approved the construction of the wall, according to local newspaper Merkur.
Deputy district chairman Guido Bucholtz said: “This is absolute madness, I was frightened when I saw this monster of a wall.
“When we talk about integration of refugees, I imagined something different. It just makes me feel bad.”
Construction of the wall is due to be completed in spring next year.
In October, more than 17,000 refugees successfully sued the German government for not giving them full refugee status.