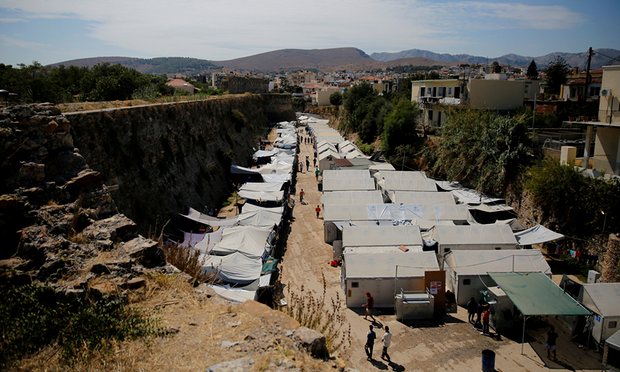 Dozens of people have been driven out of a refugee camp on the Greek island of Chios after two successive nights of attacks by a far-right group. At least two people were wounded after attackers threw Molotov cocktails and rocks as big as boulders from elevated areas surrounding the Souda camp, activists said.
Three tents were burned down and three others were hit by rocks. A 42-year-old Syrian man was assaulted, while a Nigerian boy was hit by a rock.
Fearing a third attack on Friday night, about 100 former occupants refused to re-enter the camp, instead taking shelter in a nearby car park. “We do not have any kind of protection,” Mostafa al-Khatib, a Syrian refugee, told the Guardian. “No one cares about us.”
Gabrielle Tan, an aid worker with Action From Switzerland, a grassroots organisation working on Chios, said those sheltering in the car park included families with babies and toddlers. “They’d rather sleep outside in the cold than go back inside,” said Tan.
The mayor of Chios said the attackers were thought to be affiliated with Greece’s main far-right party, Golden Dawn. “Of course Golden Dawn supporters are suspected to have participated,” Manolis Vournous told the Guardian.
Activists and camp occupants said the rocks appeared to have been thrown with the intention of killing people. Tan said: “These rocks were probably the size of a shoebox, weighing approximately 15kg. Some of them I can’t even lift.”
Greece’s asylum system is hamstrung by public sector cuts imposed during the country’s EU bailouts, an UN envoy has said, as campaigners warned of a looming winter crisis for refugees and migrants.
MEPs blame Europe’s asylum system for humanitarian conditions in Greece, where thousands are stranded in squalid camps that are a danger to physical and mental health.
Philippe Leclerc, the UN refugee agency’s representative in Athens, said EU policy on Greece during the debt crisis was “totally legitimate”, but pointed to unintended consequences for migration.
“It is a state that is affected by the consequences of the financial crisis and public control spending measures … [so] you have an emergency situation on the islands and the mainland, where the state is not fully equipped to respond.”
He was speaking to the Guardian days after the UNHCR called on Greece to take “urgent steps” to improve conditions for 11,000 people in dirty and unsafe camps on the islands of Samos and Lesbos.
Senior European sources are appalled by the camps, especially Samos, where 4,000 people are living in wretched conditions at the Vathy reception centre, six times above capacity.
New arrivals are pitching flimsy tents on steep slopes around the camps and have no access to electricity, running water or lavatories. Inside the camps, broken toilets and showers mean that people live next to raw sewage. Camp dwellers also have to contend with snakes, and rats feeding on uncollected waste. “This is supposed to be the richest and most civilised continent in the world,” said the Dutch liberal MEP Sophie in ‘t Veld. “This is happening under our noses.”
EU officials think that Greek ministries are unable to coordinate or spend EU funds to help asylum seekers: the EU has allocated €1.6bn (about £1.4bn) since 2015, but at least €554m has not been spent by Greek authorities.
Source: The Guardian