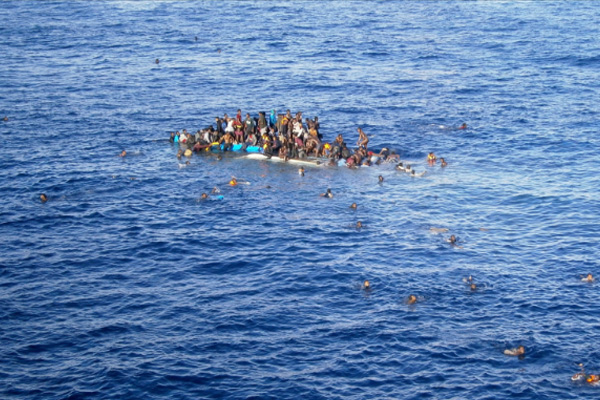 More than 90 people are thought to have drowned after their unsafe boat was damaged and sunk after leaving Libya for Europe.
General Ayoub Gassim, spokesperson for the Libyan navy, said on Thursday that the overcrowded inflatable dinghy carrying 126 people ripped and began taking on water about 26 miles (42 kilometres) off the Libyan coast.
Only 29 people were rescued, and the coast guard are still looking for survivors. Three women and a child are among the missing.
The smugglers’ boat left Tajoura in west Libya mostly carrying African nationals before dawn on Wednesday. It sent distress calls at around 3pm, Gen Gassim said a survivor reported, when it encountered high waves which led to the boat’s side tearing.
Medicins Sans Frontieres (MSF) said on Wednesday that more than 3,800 people have drowned or suffocated in overcrowded boats, mostly on the long journey (370 miles, or 595 kilometres) between Libya or Egypt to Italy. The toll makes 2016 the deadliest year on record for desperate people fleeing war, persecution or poverty in their countries of origin.
Also on Wednesday, MSF recovered the bodies of 29 people who died in a shallow pool of fuel and seawater in the bottom of another dinghy that had left Libya.
Michele Telaro, the field coordinator on the Bourbon Argos, said they were believed to be victims of fuel inhalation. Some survivors were taken to hospital with chemical burns.
“It took us three hours to retrieve 11 bodies because the mixture of petrol and water is so potent that we just couldn’t risk being in that boat for long periods of time,” he said. “It was horrific.”