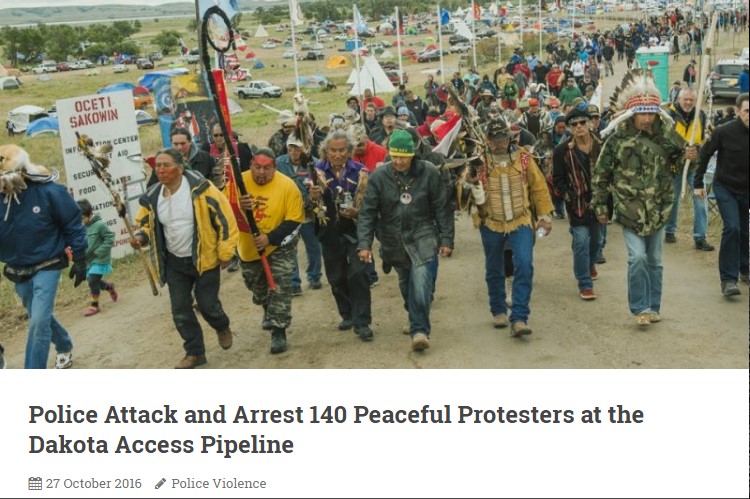 Near Standing Rock, North Dakota on Oct. 22, armed police corralled and arrested more than 140 people seeking to protect themselves, their cultural heritage and the health of the planet on the site where contractors bulldozed the peoples’ ancestral burial ground to make way for the construction of an oil pipeline.
Jihan Hafiz, a journalist for The Intercept who was among the arrested, filmed the clip above, which is among the most compelling eye-level footage of the months-long protest of the Dakota Access Oil Pipeline, which is led by members of the Standing Rock Sioux tribe and reservation.
After a morning of prayer, the protesters “were attacked by police forces who used pepper spray and beat protesters with batons,” Hafiz wrote. “Dozens of officers, backed by military trucks, police vans, machine guns, and nonlethal weapons, violently approached the group without warning.”
As the protesters attempted to leave, the police began beating and detaining them. Several Native American women leading the march were targeted, dragged out of the crowd, and arrested. One man was body-slammed to the ground, while another woman broke her ankle running from the police. The military and police trucks followed the protesters as nearly a hundred officers corralled the protesters into a circle. Among the arrested were journalists, a 17-year-old pregnant girl, and a 78-year-old woman.
In total, more than 140 people were detained in half an hour. It was the largest roundup of protesters since the movement against the pipelines intensified two months ago. A majority of those arrested were charged with rioting and criminal trespass. Overall, close to 300 people have been arrested since protests against the pipeline kicked off over the summer.