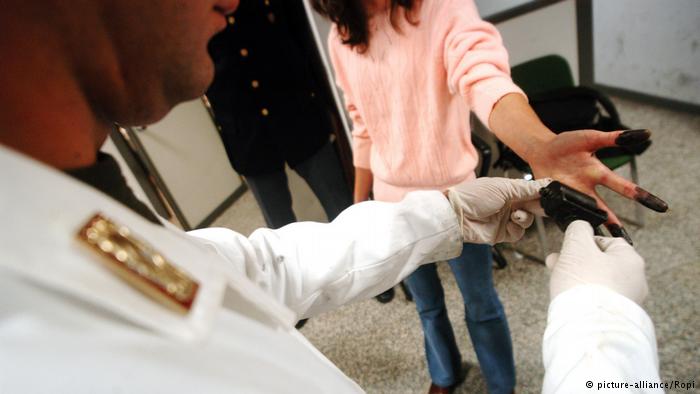 Italian police have reportedly used batons and Tasers to coerce migrants into being fingerprinted under EU regulations, Amnesty International said in a new report. Many cases potentially amount to torture and abuse, the group stated.
The Amnesty International paper, which includes dozens of migrant testimonies and witness accounts, particularly criticizes the controversial ‘hotspot approach’ advocated by Brussels, meaning that incomers are often identified in Italy – their first point of entry into the EU – to prevent them from claiming asylum elsewhere in Europe.
Amnesty claimed that due to the EU’s inability to shape a reliable asylum system, the approach has turned into “buzz words” and “a sticking plaster.” It has also put pressure on the Italian authorities, the group says, as they are directed by the European Commission initiative of 2015 to fingerprint and identify 100 percent of arrivals.
Italian police officers were subsequently given the right to apply “proportional use of coercion” against refugees not cooperating in giving their fingerprints, which in turn led to the alleged cases of the use of excessive force, torture and illegal expulsions of asylum seekers, the rights group said.
Of the 24 reports of inhuman or degrading treatment collected by Amnesty field experts, 16 cases involved beatings. In several cases, people also said they had been given electric shocks or had been subjected to sexual humiliation.
“They took us to the port of Bari… Then in groups of 22 we were taken to a police station by bus,” a 19-year-old Sudanese named Castro told Amnesty. “The police were asking us to give the fingerprints. I refused, like all the others, including some women.
“Ten police came and took me, first, and hit me with a stick on both the back and right wrist. Some took my hands back, some held my face… Then they used a stick with electricity, they put it on my chest and gave me electricity.
“I fell down, I could see but not move. At that point, they put my hands on the [fingerprinting] machine.”
A 16-year-old boy, Ishaq, and a 27-year-old man both said police officers had inflicted severe pain to their genitals. The man told Amnesty that officers in the town of Catania beat him and gave him an electric shock, before making him strip and using a pair of three-pronged pliers on him.
“I was on a chair made of aluminum, with an opening on the seat. They held [my] shoulders and legs, took my testicles with the pliers, and pulled twice. I can’t say how painful it was.”
Ishaq, who is from Sudan, said he was sexually humiliated by officers in a police station inside Turin rail terminal. After the officers took a group of refugees into a room, “they made us undress… the policemen started laughing.”
Then, as he resisted fingerprinting, police officers allegedly resorted to more extreme measures.
“They held me by my four limbs, one person for each. The fifth pulled my penis down until she got me seated. At that point one took a photo of me, while another one was turning my head towards the camera. And they managed to put my hands on the fingerprinting machine.”
In a separate case, refugees in Catania were deprived of food and water upon disembarkation until they accepted being fingerprinted. “It was midnight. We had not received any food or water, while those giving fingerprints had been given sandwiches and water,” another asylum seeker told Amnesty.
“In their determination to reduce the onward movement of refugees and migrants to other member states, EU leaders have driven the Italian authorities to the limits – and beyond – of what is legal,”said Matteo de Bellis, Amnesty International’s researcher on Italy.
Italy, which lies on the ‘frontline’ of popular migration routes across the Mediterranean, has taken more than 153,000 asylum seekers this year, according to Foreign Ministry data released in late October. Only 1,200 people have been relocated from Italy so far, out of the 40,000 that the EU had promised would be moved.
The massive influx of refugees and migrants has given rise to far-right movements in Italy and other European countries, which exploit popular fears of the perceived threat to Europe’s cultural identity from predominantly Muslim newcomers. Over 305,700 non-EU asylum seekers arrived to European states in the second quarter of 2016 alone, according to the latest Eurostat figures.