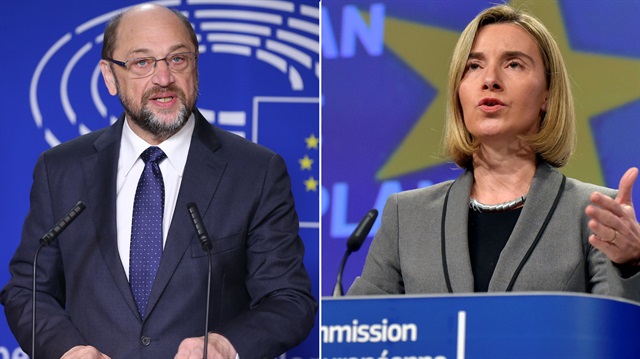 Three high-ranking European Union leaders failed to use the word of “terror” while condemning deadly attacks near a football stadium in Istanbul.
Two explosions rocked the Besiktas district of Istanbul late Saturday when a car bomb was detonated two hours after the end of a Turkish football league match between Besiktas and Bursaspor.
Moments later a suicide bomb attack rocked Macka Park in the same neighborhood. The suicide bomber blew himself up after police noticed him, according to Interior Minister Suleyman Soylu. The attacks martyred at least 38 people and injured 155 others.
Deputy Prime Minister Numan Kurtulmus said Sunday that the PKK terror group was “most likely” involved in the attack.
EU foreign policy chief Federica Mogherini expressed unity with Turkey following the attacks, but did not label them as terror.
“All our solidarity to all citizens of Turkey,” she posted on Twitter.
European Parliament president Martin Schulz also avoided using “terror” in a statement that also voiced unity with the people of Turkey.
“My thoughts & solidarity with Turkish citizens, with families of victims of Istanbul attacks. I wish speedy and full recovery to the injured,” Schulz said.
And European Union enlargement commissioner Johannes Hahn preferred to use “violence” in his statement.
“I harshly condemn an attack in Istanbul. Violence has no place in democratic societies,” Hahn said.
Turkey recently accused the EU of not providing enough support to fight terrorism.
Earlier this month, Schulz reacted to the arrests of 11 journalists and, lawmakers from the opposition Peoples’ Democratic Party (HDP) on terror-related charges.
Schulz indicated the EU could impose sanctions against Turkey following its anti-terror arrests.
In response, President Recep Tayyip Erdogan criticized Schulz for ending Turkey’s EU membership process and demanded the EU issue its decision on the matter.
The PKK — listed as a terrorist organization by Turkey, the U.S., and EU — resumed its decades-old armed campaign in July last year. More than 300 civilians and nearly 800 security personnel since have been martyred. Approximately 8,000 PKK terrorists have been killed or apprehended.