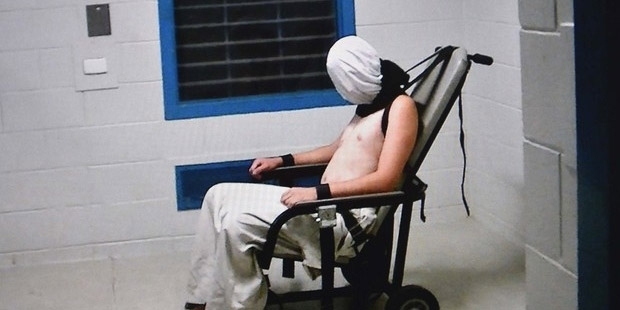 On Monday evening, Four Corners, one of Australia’s peak investigative journalism programs, broadcast shocking footage of young detainees at the Don Dale detention centre in the Northern Territory being mistreated by staff.
In one image, a young man, Dylan Voller, is strapped to a chair by his wrists and neck, and covered with a “spit hood”.
In another, guards repeatedly sprayed six teenagers – all of them Aboriginal – with tear gas after they allegedly began to act aggressively to Don Dale staff.
The guards can be heard on the video saying, “no let the fucker come through because when he comes through, he will be off balance. I’ll pulverise the little fucker. Oh shit, we’re recording hey [laughs]”.
In the footage, 14-year-old Aboriginal boy Jake Roper is seen trying to escape his small concrete cell before being tear gassed for up to eight minutes.
Roper had been kept in the cell with no natural light, air conditioning or running water for up to 23 hours a day. The footage shows a distressed Roper screaming at the officers, “I’ve been in the back cells for how long bruz?”
“They were kept in those cells for up to 24 hours a day,” Howard Bath, the former NT children’s commissioner, told the program.
Indigenous incarceration is at crisis levels in Australia. The NT has long been criticised for its punitive approach to young Aboriginal offenders, many of them in custody for minor crimes or on remand waiting to appear before the court.
At present Aboriginal young people make up almost 96% of the juvenile detention population in the Northern Territory despite only comprising 44% of the population aged between 10 and 17.
In the past 10 years the rate of Aboriginal and Torres Strait Islander imprisonment has increased by 88%, compared to the non-Indigenous imprisonment rate, which has increased by 28%.
Indigenous Australians only make up 2% of the Australian population, yet they make up more than 27% of the nation’s prison population. In the Northern Territory 90% of the prison population is Aboriginal.
In the past five years, the deaths of Aboriginal and Torres Strait islanders in custody have increased due to the rising rates of imprisonment. 449 Indigenous Australians died in custody between 1980 and 2011. That’s more than one death a month.