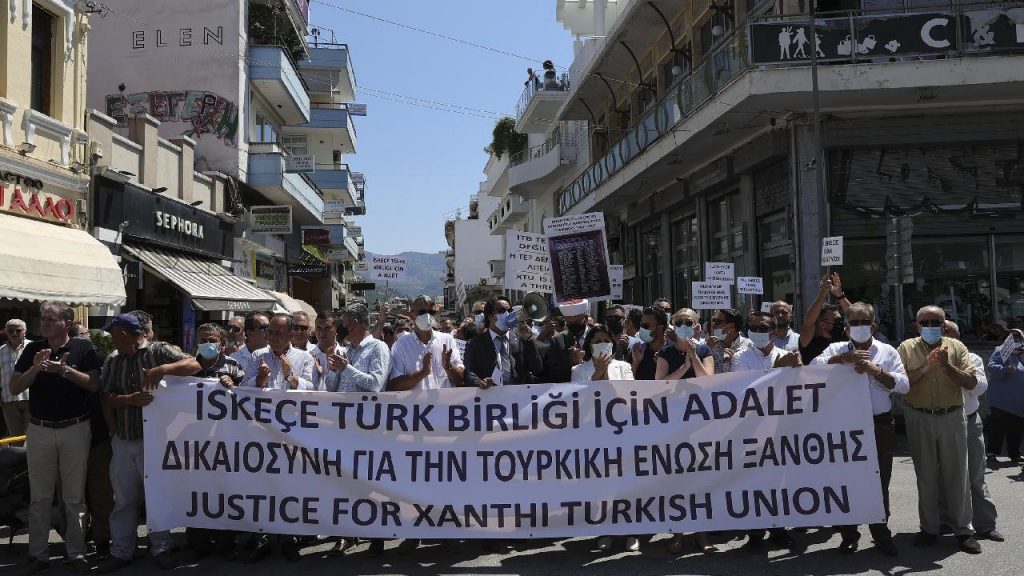 Greece has launched a judicial investigation into a march for rights by members of the country’s Turkish minority that took place in July 2021.

The march, which was organized by the Xhanti Turkish Union (ITB), one of the oldest and most influential associations of Greece’s Turkish minority, was attended by thousands of people and prominent figures from the minority and protested against Greece’s not applying decisions of the European Court of Human Rights (ECHR) which favored the minority.

The investigation by the public prosecutor in northeastern Xanthi province claims that “provocative speeches and lies” against the Greek state and its judicial authorities were delivered at the march, during which COVID-19 measures were also violated, said the pro-minority Millet Gazetesi daily.

The president of the ITB, Ozan Ahmetoglu, drew attention to the fact that the investigation was initiated seven months after the march.

“We, as ITB, resolutely will continue to struggle for our rights, as we have been doing for the last 39 years,” he said on Twitter.

The Friendship, Equality and Peace Party (DEB) – a party popular among Greece’s Turkish minority, rejected the claims by the public prosecutor and reiterated that the march had urged Greece to comply with the ECHR rulings.

“Our country, Greece, should abandon intimidation policies towards its Muslim Turkish minority and cease to perceive them as a threat,” the party said in a statement.

“The launch of an investigation after 7 months of the democratic march organized by the Xanthi Turkish Union, which has been struggling for 39 years, is a clear continuation of our country’s policies of intimidation and suppression of the Turkish community in Western Thrace,” said the statement.

​​​​​​​Under the 2008 ECHR ruling, the right of Turks in Western Thrace to use the word “Turkish” in the name of associations was guaranteed, but Athens has failed to carry out the ruling, effectively banning the Turkish group’s identity.

Greece’s Western Thrace region is home to a Muslim Turkish community of around 150,000.

In 1983, the nameplate of the Xanthi Turkish Union (Iskece Turk Birligi) was taken down, and the group was completely banned in 1986, on the pretext that the word “Turkish” was in its name.

To apply the ECHR decision, in 2017, the Greek parliament passed a law enabling the banned associations to apply for re-registration, but the legislation included major exceptions that complicated the applications.

Turkiye has long decried Greek violations of the rights of its Muslim and Turkish minority, from closing down mosques and shutting down schools to not letting Muslim Turks elect their own religious leaders.

These measures violate the 1923 Treaty of Lausanne as well as ECHR verdicts, making Greece a state that flouts the law, say Turkish officials.