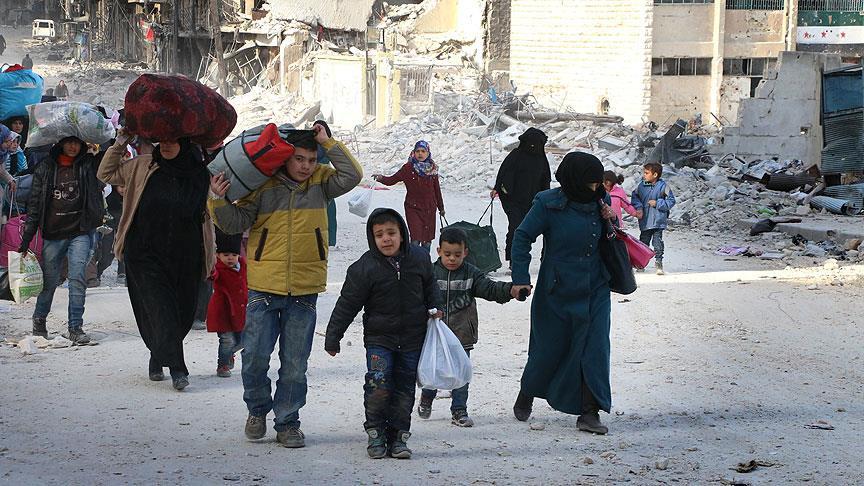 Civilians in regime-besieged neighborhoods of eastern Aleppo have faced severe bread shortages since Saturday, according to a local civil defense official.
“Only three bakeries are still functioning to meet the needs of thousands of city residents,” Najib al-Ansari, a pro-opposition civil defense official based in Aleppo, told Anadolu Agency.
“The bakeries don’t have the capacity to meet the demand for bread in eastern Aleppo,” he said. “Few local residents are able to benefit from their services.”
“Most other bakeries have been bombed or have had to shut down due to an acute lack of baking flour,” al-Ansari added.
“The only three bakeries remaining were supposed to have distributed bread on Saturday, but failed to do so due to intense airstrikes,” the official said.
“Not a single loaf of bread has been baked in the last five days,” he added.
Most of Eastern Aleppo’s bakeries have been forced to stop operating, reportedly due to intense attacks by the Assad regime and allied militias backed by Iran.
Since mid-November, more than 739 civilians have been killed — and hundreds injured — in regime attacks on opposition-held parts of eastern Aleppo, according to local civil defense officials.
Regime forces have recently stepped up attacks on eastern Aleppo in an effort to retake the city and advance on Idlib, one of the last opposition strongholds in northeastern Syria.
The fierce bombardments have reportedly forced hospitals and other medical facilities in the war-battered city to cease operations while academic activities have been suspended.
Syria has been locked in a devastating civil war since early 2011, when the Bashar al-Assad regime cracked down on pro-democracy protests — which erupted as part of the “Arab Spring” uprisings — with unexpected ferocity.
Since then, hundreds of thousands of people are believed to have been killed and millions more displaced by the conflict.