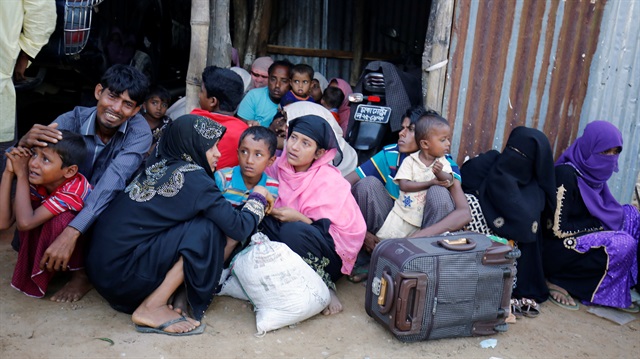 At least 86 people have been killed and 30,000 displaced as violence continues unabated in Myanmar’s Rakhine state.
Rohingya Muslims from Myanmar poured into neighbouring Bangladesh this week with some feared drowned after a boat sank in a river during a bid to flee escalating violence that has killed at least 86 people and displaced about 30,000.
Some Rohingya refugees have been missing since Tuesday after a group crossed the river Naaf that separates Myanmar and Bangladesh. Those who managed to enter Bangladesh sought shelter in refugee camps or people’s homes.
“There was a group of people from our village who crossed the river by boat to come here, but suddenly the boat sank,” said Humayun Kabir, the father of three children untraceable since the mishap.
Although many of those on board could swim, and were able to reach the river bank, seven people are still missing, he added, his children among them.
Mynamar’s violence is the most serious since hundreds were killed in communal clashes in the western state of Rakhine in 2012, and poses the biggest test yet for the eight-month-old administration of Nobel Peace Prize winner Aung San Suu Kyi.