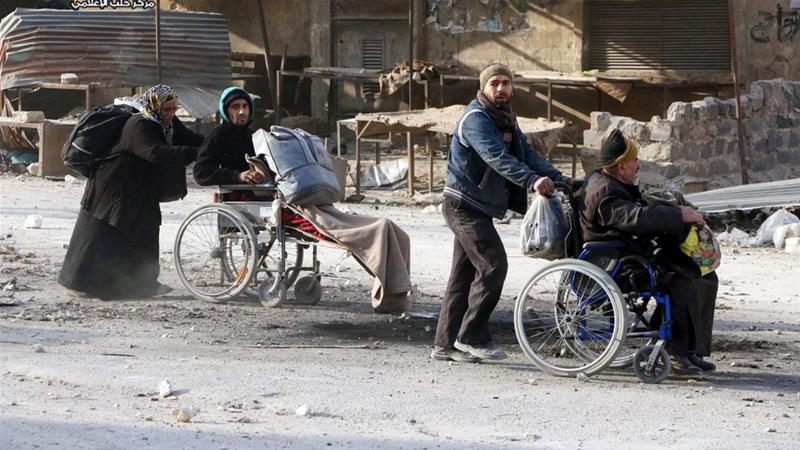 Up to 20,000 people have fled eastern Aleppo over the past 72 hours as Syrian government forces continued to advance in the rebel-held part of the city, according to the Red Cross.
Terrified civilians have fled empty-handed into remaining rebel-held territory, or crossed into government-controlled western Aleppo or Kurdish-held districts.
The 20,000 figure is an estimate and could increase as “people are fleeing in different directions”, International Committee of the Red Cross spokesperson Krista Armstrong told the AFP news agency.
United Nations humanitarian chief Stephen O’Brien had earlier put the number of displaced people from eastern Aleppo at 16,000.
The city, which was Syria’s biggest before the start of a civil war that has killed hundreds of thousands of people, has been divided between the government-held west and rebel-held east, where UN officials say at least 250,000 people remain under siege.
The Syrian government offensive to recapture the rebel-held parts of Aleppo has sparked international alarm as it intensified this week.
A voluntary rescue group known as the White Helmets reported at least 51 civilians killed in east Aleppo and more than 150 injured during the government assault.
Syrian government forces dropped “more than 150 air strikes from war planes and helicopters and [fired] more than 1,200 artillery shells”, the group wrote on its Facebook page.
The attacks hit the neighbourhoods of Bab al-Nairab, al-Mayser and al-Salheen, among others.
SANA, the official Syrian state media arm, reported that Syrian government forces and allies on Monday took control of several areas in the city’s northeast, including al-Haidariya, al-Sakhour, al-Inzarat, al-Sheikh Khedr, Jabal Badro, and al-Halk.
France called for an immediate UN Security Council session on the fighting, which has seen the army capture a third of opposition-controlled east Aleppo in recent days.
The UN Security Council will hold an emergency meeting on Wednesday on the dire humanitarian crisis unfolding in Aleppo, diplomats said.