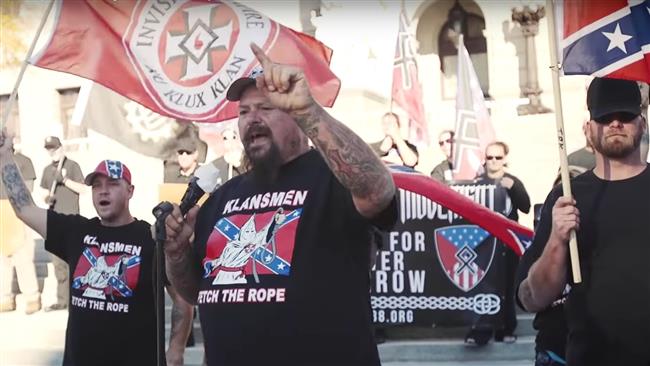 A protest by a neo-Nazi organization has taken place outside government buildings in the US state of Pennsylvania, which was met by a larger counter-rally.
Dozens of members of the Nationalist Socialist Movement (NSM), an American neo-Nazi group, chanted slogans in support of white supremacy and against racial diversity in the US.
The neo-Nazis repeatedly raised their right arms in ‘Heil Hitler’ salutes and shouted “white power.”
The protests took place on Saturday in downtown Harrisburg, the capital city of Pennsylvania.
The NSM protestors waved the KKK and Confederate flags, along with other Nazi symbols, on the Pennsylvania Capitol steps.
They also expressed support for Republican presidential candidate Donald Trump and denounced his Democratic rival Hillary Clinton.
One neo-Nazi demonstrator unfurled a Donald Trump sign, bearing the slogan, “Build the Wall,” referring to a proposal by Trump to build a wall at the border with Mexico to prevent migration.
Scores of police officers in riot gear separated the NSM rally from a much larger anti-racist protest.
About 200 counter-protestors gathered behind police barricades across the Pennsylvania State Capitol to chant slogans against racism.
The anti-racist demonstrators held signs to condemn the white supremacist ideology. They also condemned what they called Trump’s support of the ideology.
NSM is an American neo-Nazi, white supremacist and anti-semitic political party based in Detroit, Michigan.
The largest and most prominent neo-Nazi group in the United States, NSM is notable for its racist views and anti-Jewish rhetoric, according the Southern Poverty Law Center.
White supremacist groups present a far greater terror threat to the United States than individuals linked to the al-Qaeda or ISIL extremist groups, according to a study released last year by the New America Foundation, a Washington-based think tank.
Most of the “terror” attacks carried out on US soil since the September 11, 2001 attacks have been committed by white right-wing and radical anti-government groups, the study found.
Nearly twice as many people have been killed by white supremacists and anti-government fanatics since 9/11 than by individuals inspired by al-Qaeda, according to the report.