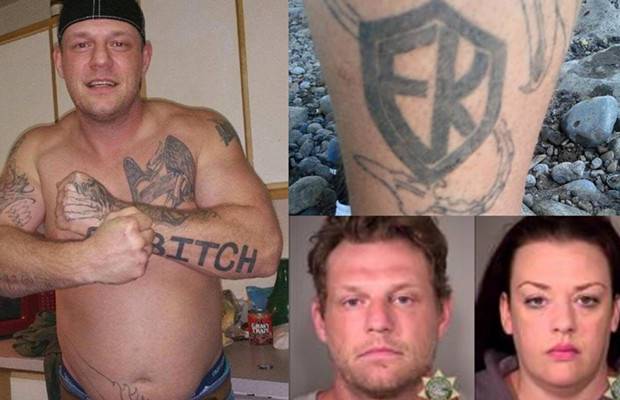 A white supremacist mowed down an African-American teenager with his car and smashed youth’s head into the window of a convenience store as his girlfriend cheered him on. Both have been indicted for murder.
Larnell Malik Bruce, 19, was charging his phone outside a 7-Eleven in Gresham, Oregon, just before midnight on August 10, a female acquaintance told local police.
Bruce, who was just a few days shy of his 20th birthday, had been charging his phone outside the convenience store when the white couple nearly twice his age exited their vehicle.
For reason still unclear, a fight quickly broke out.
As Courtier smashed Bruce’s head into the store’s front window, cracking a pane of glass, his girlfriend encouraged the beating.
“Get him, baby,” Hunt urged her boyfriend, according to police. “Get him, baby!”
Eventually, Bruce pulled out a machete and the couple retreated back to their Jeep.
Investigators said Bruce tried to run away from the couple who began to chase him down in their car. Security camera footage shows the teen doing his best to zigzag away from the SUV.
As he tried to cross the street, the couple’s Jeep is seen moving into oncoming traffic and hitting the teenager head-on, although the direct impact is not caught on camera.
Police, who had been called by a 7-11 employee when the fight intital broke out, arrived on the scene just moments later to find the critically injured teen with blood gushing from his head and his ears lying in the middle of the street.
Bruce died from his injuries days later.
Prison records obtained by the Portland Mercury reveal that Courtier is a longtime criminal with a notorious history as a member of a white supremacist prison gang called European Kindred (EK), and he has their shield tattooed on his calf.