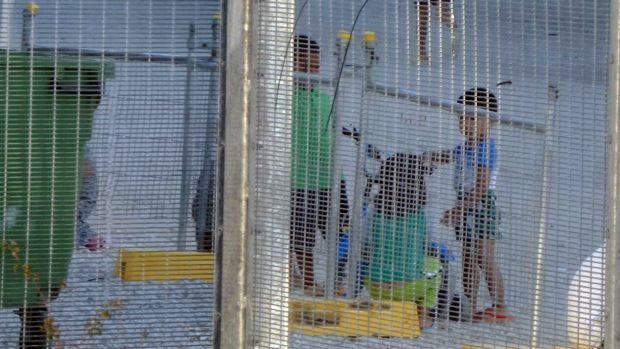 The Australian government is responsible for the deliberate and systematic torture of refugees on Nauru and should be held accountable under international law, according to a major new report informed by unprecedented access to the secretive island.
Amnesty International said it had interviewed 62 refugees and asylum seekers on Nauru, and more than a dozen current or former contract workers who delivered services on behalf of the Australian government, to compile a report it titled: Island of Despair.
The cache of evidence details allegations of recurrent self-harm and attempted suicide, children being hit by teachers and threatened with machetes by peers, deficient medical care and persecution akin to that which refugees had fled in their homelands.
The offshore processing regime was “explicitly designed to inflict incalculable damage on hundreds of women, men and children” as an act of deterrence, by isolating them “on a remote place from which they cannot leave, with the specific intention that these people should suffer harm”, Amnesty said.
The report concluded: “The government of Australia’s ‘processing’ of refugees and asylum-seekers on Nauru is a deliberate and systematic regime of neglect and cruelty, and amounts to torture under international law.”
Furthermore, Amnesty warned Australia’s policies had shifted the goalposts on what other countries considered to be acceptable treatment of refugees, and had “already harmed global standards on refugee protection”.
The global human rights group visited Nauru for five days in July, and corroborated testimony from interviews using thousands of pages of medical reports and statements to police, and other data on the public record.
It painted a picture of a dysfunctional system where Australia exercised strict control but publicly passed the buck to Nauru, and where on-the-ground authorities lacked the power to make decisions without Canberra’s permission.
“They can’t authorise anything, they can’t do anything, unless Canberra said ‘jump’,” one service provision manager told Amnesty. Even the contracted healthcare operator, International Health and Medical Services, was hamstrung when it came to medical evacuations. “IHMS can’t do anything unless Canberra authorises it,” the manager said.
Anna Neistat, Amnesty’s senior director of research who travelled to Nauru, said the report provided direct evidence of Australia’s responsibility for day-to-day decision-making, and that Australia should be held accountable for breaching the Convention Against Torture – with a remote possibility that individual government officials could be prosecuted under international law.
“It’s the intentional nature of it,” she told Fairfax Media. “The Australian government is not even hiding the fact that the key purpose of this policy is deterrence. When you set up a system that inflicts deliberate harm as a deterrence, it’s really hard to find another name for it other than torture.”
Dr Neistat, a 15-year veteran of crisis work in Syria, Yemen and Chechnya, said the Nauruan regime was particularly galling because people’s suffering was “absolutely unnecessary” and shrouded in “shocking” secrecy. “I was not prepared for what I saw, and definitely not prepared for what I heard,” she said.