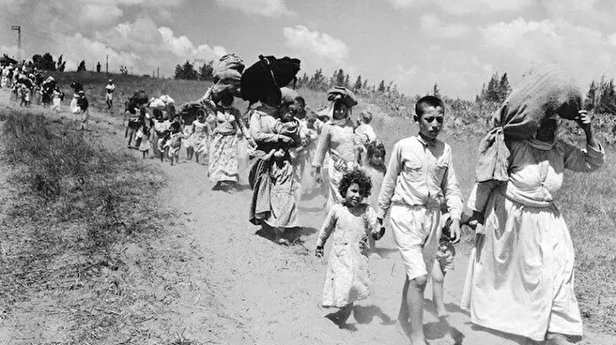 A technical error on Israel’s state archive website has revealed that a prominent Israeli politician said in 1948 that he could “forgive instances of rape” committed against Palestinian women in the violence that preceded the founding of the Israeli state, Haaretz has reported.

Aharon Zisling, who would later serve as agriculture minister, made the remarks during a provisional government meeting discussing the war that led to Israel’s creation, the newspaper reported on Wednesday.

Zisling’s remarks, which were supposed to be censored with a digital blackout on the state archive website, were part of a document detailing meeting minutes from July 1948.

During events that began in 1948 and are known to Palestinians as the Nakba, or catastrophe, Israeli soldiers killed an estimated 15,000 Palestinians and forced some 750,000 from their homeland.

According to Haaretz, Zisling’s comments were revealed due to a technical glitch that allowed digital blackouts to be revealed on the document with a simple click.

The documents also revealed that David Ben-Gurion, the man who would become the country’s first prime minister, said later at the same meeting that some Palestinian villages must be wiped out – because they “constitute a great danger”.

According to Haaretz, the censored version of the document showed Ben-Gurion saying, “I am against the wholesale demolition of villages,” but once the blackout was removed he appears to have added: “But there are places that constituted a great danger and constitute a great danger, and we must wipe them out. But this must be done responsibly, with consideration before the act.”

The Israeli state archive said the document was meant to be published without censorship, but a technical error led to the appearance of the blackouts, according to Haaretz.

The Akevot Institute, an Israeli research centre, had requested access to the meeting minutes.

In December 2021, Haaretz and the Akevot Institute revealed details of three massacres committed by Israeli forces in the villages of Reineh, Meron and al-Burj in 1948.

Those documents showed that prominent Israeli leaders “knew in real time about the blood-drenched events that accompanied the conquest of Arab villages”.