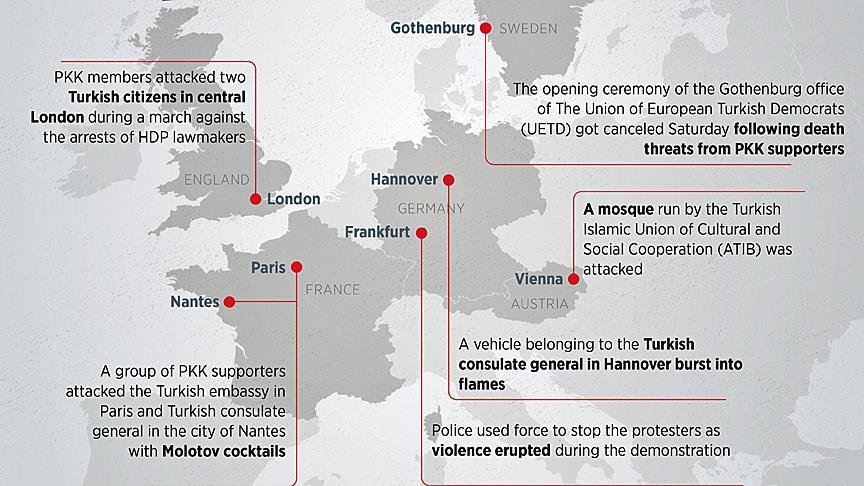 Attacks have taken place in the UK, France, Austria and Sweden.
BRUSSELS
The PKK has started to terrorize Turkish citizens and institutions across Europe following the arrests of opposition Peoples’ Democratic Party (HDP) lawmakers in Turkey on Friday.
Following is a timeline of attacks on Turkish citizens in Europe since Thursday when reports about an impending police operation against the HDP surfaced:
UK
On Saturday, PKK members attacked two Turkish citizens in central London during a march against the arrests of HDP lawmakers.
Ceylan Nas, 25, a London-based student in London and her fiance Burak Tas, 28, came under attack outside the Oxford Circus tube station when they were filming protesters who shouted anti-Turkey slogans and carried placards.
Nas told Anadolu Agency the group called them “fascists” before physically attacking them after they replied to their slogans targeting Turkish President Recep Tayyip Erdogan.
“I was between the attackers and my fiance, thinking the police would interfere. Another four people attacked my fiance and dragged him into a shop. They beat him in front of the escalators.”
Nas said her arm had been injured in the attack.
Separately, PKK sympathizers also threw stones and eggs at the Turkish embassy during a protest last Friday.
FRANCE
On Thursday night, a group of PKK supporters attacked the Turkish embassy in Paris with Molotov cocktails following reports of an upcoming operation against the HDP. The embassy building was damaged. Embassy staff urged French authorities to nab the perpetrators of the incident. So far, no suspect has been detained.
On Saturday night, Turkish consulate general in the city of Nantes also came under Molotov cocktail attack. No casualties were reported.
During the pro-PKK protest in the southern French city of Marseille, a group of people tried to enter the Turkish general consulate, but police managed to stop them.
SWEDEN
The opening ceremony of the Gothenburg office of The Union of European Turkish Democrats (UETD) got canceled Saturday following death threats from PKK supporters.
Harun Uzel, chairman of the union’s Gothenburg Office, said: “A group of 150 pro-PKK people raided the Kungelv municipality, hanging banners on the wall of building, saying, ‘We won’t let Daesh talk here’.
“We received dozens of death threats in the last two days, but we are determined to open the office.”
GERMANY
PKK supporters in Germany violently protested against the arrest of several HDP lawmakers in Turkey.
On Friday, several hundred PKK protesters gathered in front of the Turkish consulate general in Frankfurt and tried to break through the security cordon. Police used force to stop the protesters as violence erupted during the demonstration.
On Saturday, a vehicle belonging to the Turkish consulate general in Hannover burst into flames in the early hours of Saturday, several hours after PKK supporters demonstrated in front of the consulate general building.
Also in Hannover, several PKK supporters assaulted consulate personnel during the Turkish Republic Day reception.
AUSTRIA
On Thursday night, a mosque run by the Turkish Islamic Union of Cultural and Social Cooperation (ATIB) in Rankweil/Kunert region in the Vorarlberg state of Austria was attacked. Surveillance cameras recorded an unidentified person writing “HDP” on the mosque’s plaque.
Abdullah Horoz, a regional coordinator of ATIB, said: “Recently, the trouble among terror groups and its sympathizers in Turkey have transferred abroad, unfortunately.”