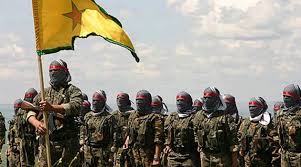 US-backed YPG/PYD forces have forcefully displaced thousands of Syrian civilians, mostly Arabs, and demolished villages in northern Syria, often in retaliation for the residents’ perceived sympathies for Islamic State and other militants, London-based human rights watchdog Amnesty International has said. A fact-finding mission to northern Syria has uncovered a wave of forced displacement and home demolitions amounting to war crimes carried out by the Autonomous Administration led by the Syrian political party Partiya Yekîtiya Demokrat (PYD) controlling the area, said Amnesty International in a report.
“By deliberately demolishing civilian homes, in some cases razing and burning entire villages, displacing their inhabitants with no justifiable military grounds, the Autonomous Administration is abusing its authority and brazenly flouting international humanitarian law, in attacks that amount to war crimes,” said Lama Fakih, Senior Crisis Advisor at Amnesty International.
“In its fight against IS, the Autonomous Administration appears to be trampling all over the rights of civilians who are caught in the middle. We saw extensive displacement and destruction that did not occur as a result of fighting. This report uncovers clear evidence of a deliberate, co-ordinated campaign of collective punishment of civilians in villages previously captured by IS, or where a small minority were suspected of supporting the group.”
Some civilians said they were threatened with US-led coalition airstrikes if they failed to leave.
Amnesty International researchers visited 14 towns and villages in al- Hasakeh and al-Raqqa governorates in July and August 2015, to investigate the forced displacement of residents and demolition of homes in areas under the control of the Autonomous Administration.
Satellite images obtained by Amnesty International illustrate the scale of the demolitions in Husseiniya village, in Tel Hamees countryside. The images show 225 buildings standing in June 2014 but only 14 remaining in June 2015 – a shocking reduction of 93.8%.
In February 2015, the Autonomous Administration’s military wing, the YPG (the People’s Protection Units), took control of the area, which had been under IS control, and began demolitions, displacing villagers. Researchers visiting Husseiniya saw ruins of destroyed homes and interviewed eyewitnesses.
“They pulled us out of our homes and began burning the home… they brought the bulldozers… They demolished home after home until the entire village was destroyed,” said one witness.
In villages south of the town of Suluk, some residents said YPG fighters had accused them of supporting IS and threatened to shoot them if they did not leave. While in some cases residents acknowledged that there had been a handful of IS supporters in their villages the majority were not supporters of the group.
In other cases, villagers said YPG fighters had ordered them to leave threatening them with US coalition airstrikes if they failed to comply.
“They told us we had to leave or they would tell the US coalition that we were terrorists and their planes would hit us and our families,” said one resident, Safwan.
Although the majority of residents affected by these unlawful practices are Arabs and Turkmen, in some cases, for example in the mixed town of Suluk, Kurdish residents have also been barred by the YPG and Asayish, the Autonomous Administration’s police force, from returning to their homes. Elsewhere, for example in Abdi Koy village, a small number of Kurdish residents have also been forcibly displaced by the YPG.