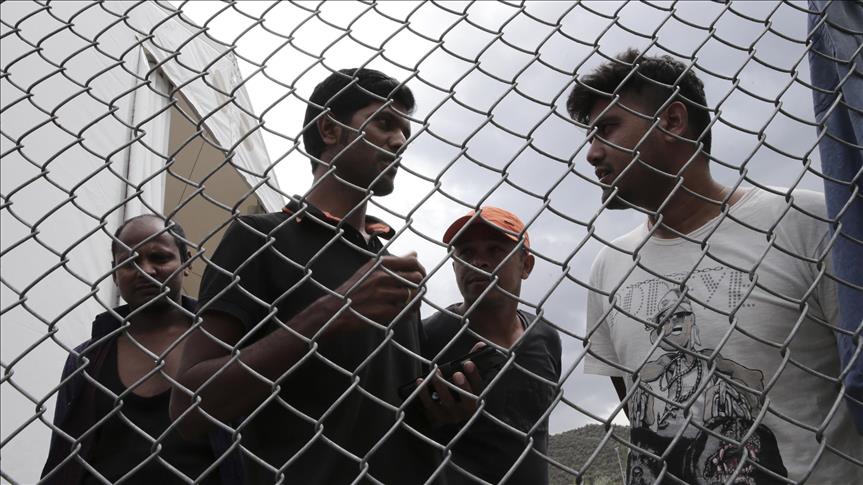 “We have no permission for go out. Now we are prison [sic],” a 17-year-old Pakistani migrant texted, along with a sad emoji face, locked inside a refugee camp on the Greek island of Lesbos.
Just under a hundred minors aged 12 to 17 find shelter in the rooms reserved for them. “We have beds, air conditioning, and showers, but we cannot go out,” the teenager, who goes by the pseudonym Dilawari Ali and has been living there since June 15, told Anadolu Agency.
At ages when children are supposed to be exploring life and running free, the minors stranded at Moria camp, Lesbos, can take a walk outside the camp once a week for six hours and that is it, Ali explained.
But he is grateful for the security the camp provides him and his peers. “We are safe, if they [Greek authorities] feel any problems coming they take us out of Moria,” he said.
That was, indeed, the case Monday night, when clashes broke out in the camp between migrants of various ethnic backgrounds, and as the violence escalated, fires set by the migrants themselves burned down almost half of the camp.
Immediately the minors were transported to another camp, Lesvos Solidarity (formerly known as PIKPA), which generally accommodates “vulnerable cases,” Efi Latsoudi, a member of the volunteer NGO which runs the camp, told Anadolu Agency.
The minors spent two days at the camp and were returned to Moria on Wednesday morning.
“It was an emergency situation. They were in danger because of the fire, because of the racist attacks in Moria, and they took them out,” Latsoudi said of that night.
“It was like breathing,” she said, describing the minors’ response to their short break from Moria. “They were very happy, they were kissing us, telling us thank you.”